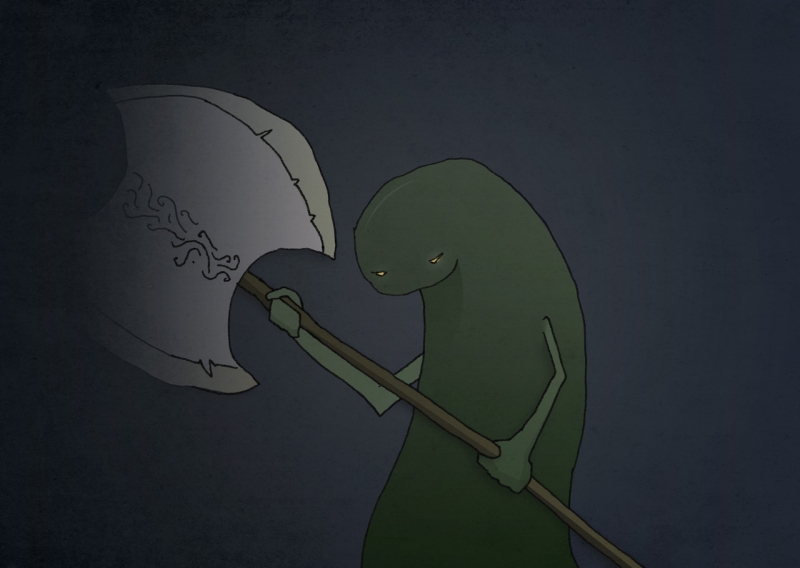 This game and the series of games that preceded it are known for their challenging difficulty. The game itself is something of a mix between an RPG and a platformer and an action game. It has many RPG elements, like character leveling and loot, but it also has a lot to do with memorization and timing.

In the game, there are enemies and bosses, and one progresses through each section of an area by lighting bonfires. These bonfires become checkpoints that the character returns to upon dying. And in Dark Souls 3 I died. A lot.

I think the hardest part for me to get used to was that every single enemy needs to be handled with care and precision. No matter how far one gets in the game, or how many levels one has, enemies can inflict significant amounts of damage if the player loses focus or mistimes an attack.

Once an enemy attacks, the player must either block, roll, or parry, hit them back, and then repeat. This pattern holds true for nearly the entire game, with every enemy. As one gets stronger in the game, the amount of hits required to vanquish a foe becomes less and less, but attention is still a requirement.

This methodical and rhythmic gameplay pattern is most evident on the boss fights. Bosses are a lot like larger enemies, they have specific attack patterns, but also have much larger health bars.

The bosses in Dark Souls sort of define this series of games as well. In perusing the tips and tricks for my play through of the game, often one would read players reminiscing how difficult they found a boss in a previous game, or how easy this current boss is compared to another.

My play through was full of ups and downs. One day I would be full of jubilation after just having beaten a boss on my first encounter with them, but then other days I would be fully dejected about the entire experience, questioning why I was even playing still? Was I having fun anymore?

The boss that gave me particular difficulty was the very final boss, the Soul of Cinder.

The experiences with this boss appear to run the gamut. Some players reported that they were able to beat him easily in a few tries, while others were online desperately seeking guidance after many failed attempts.

I was in the latter camp.

My play schedule would be for a couple hours each day, usually after work, but then not so late into the evening that it would be the last thing that I did that night.

I started attempting this fight on a Sunday, and didn’t beat him until Wednesday.

The feeling of not being able to complete this game that I was 95% of the way through was tough. After each of my daily sessions ended in failure, I would question my very ability to proceed. Should I just give up now? Should I just quit?

I watched many videos on YouTube with strategies and tactics, but then when it came time for me to try them myself, I just couldn’t translate what I had learned.

The key to any fight in this game is timing. The enemies all have specific animations or stances they take when they are about to attack, so as players, we learn to be extremely aware of these subtle cues, and they often will dictate if it’s time to run, or if a window for a counter attack is coming.

The challenge for me on this particular boss was that his timings were not as straight forward as most. Sometimes an attack would start, but I would have to wait a few seconds before it was time to dodge. If I dodged too soon, I would come out of it right as the actual attack was starting. Dodge too late, and I would take the full force of the attack.

There was also a random quality to this boss fight. The moves weren’t always the same, so there were times when I would do extremely well against one move set, but then barely make a scratch on another.

As time went on, I got better at reading and timing the attacks, but then phase two of the fight kicked in. In this phase his moves were somewhat more predictable, but he had one move in particular that, if I didn’t see it right away, meant almost instant death.

Several times during my trials with this boss, I got him down to within 3-4 hits of death, only to get killed myself. That feeling of being so close, but then failing, was terrible.

Finally, late Wednesday night, I got him down low in the second phase again. The key, I had to keep reminding myself, was to stay patient, and not try to be any more aggressive. So I waited.

One of the secrets to this phase is waiting for the enemy to come to you. I needed to let his aggressiveness be his own downfall.

I struck the final blow.

Instantly the attack animation stopped, and the death animation began. My heart was thumping, my arms were shaking, and I let out an audible cry of excitement and exasperation. After three nights of going to bed feeling like a failure, I had achieved what I set out to.

Over time I think I will look back on my experience with this game with a lot of positivity, but in these last few days, the experience of this final boss has really tainted the rest of my play through. While I was ultimately successful, the road there felt difficult to stomach, and the depths it took me to are hard to justify.

Much of my inexperience might be forgiven if I looked deeper at it. This was my first experience of the franchise, and I’m a relative newbie to the world of console gaming. I cannot, however, take much solace in these deficiencies. By the end of the game I knew what it was, and for a time, it had simply beat me, fair and square. I can, however, take some solace in my ability to learn and adapt. My ability to research and experiment and keep persevering in the face of failure.

I have learned that the world will always be full of bad guys, but with time, and focus, bit by bit, we can overcome.